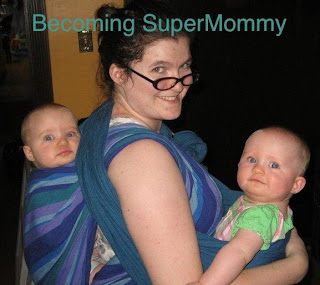 A few days ago, I had a bit of a crazy day.  All morning my kids played in a tent we’d set up in the living room (still too cold outside!), and then after their nap I took them to a deli to meet up with my group for a giant project for school.  Because being a mother of twin toddlers just isn’t enough to have on one’s plate when spring is springing.

They cheerfully snacked on peas and crackers as I coordinated my groups final project efforts, and then we decided to hang around and wait until my husband was off of work, so he could meet us there and we could all eat.  My girls, at eighteen months old, might have been cooperative while my classmates were around, but after all they’re still toddlers.  By the time Daddy arrived, they were done with sitting down.  As he ate his dinner, I chased my twins all over the restaurant.  They were cheerful, and there were lots of other children.  Including one family with a baby.

One of my girls is obsessed with babies.  As she cooed and laughed at her new little friend, the mother and I struck up a conversation about nursing.  Did I nurse?  Oh yes, I nursed them until they self-weaned.  Wasn’t that difficult?  Always nursing?  Oh, not really, I nursed them both at the same time, it was much easier.
“Wow,” she said, “You must be some kind of Super Mom.”  I just smiled, don’t want to give away my secret identity, do I?
But the fact of the matter is, nursing twins just wasn’t that difficult.  I had an amazing pair of allies on my side.  Well, on my front, really.  My leaky boobs.

Those you mothers who have nursed, you are no doubt familiar with the leaky boob phenomena.  One breast is occupied with nursing, and the other gets a tad drippy.  This was the most helpful thing I had going for me while I was trying to get nursing established. 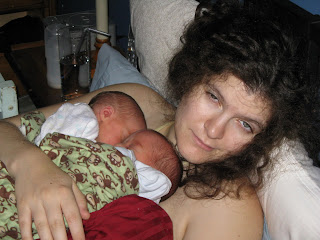 My twins were a little premature, coming into the world at exactly 35 weeks.  So their sucks were fairly weak.  Nursing didn’t come easily.  I pumped and pumped and pumped, so as to give my girls the best food I could.  And I found that when I pumped one breast, the other drizzled a little bit.  Could I maybe use this to my advantage?

So, in the first weeks, I decided to give pumping and nursing simultaneously a shot.  It was like magic- as soon as the un-pumped breast started leaking, the baby attached to it began to get the hang of the whole nursing experience.  Before long, I had one good nurser.  Now she became the starter, as it were.  I’d get comfy, latch on my champion nurser, wait until boob number two started to leak, and latch on baby number two.

By the time they were ten weeks old, they were nursing like little milk-lovin’ rock stars.  I know, ten weeks is a long time when you’re not sleeping and you’ve got two people screaming at you that they’re hungry and your boobs aren’t helping, but at five weeks premature, really that’s more like an adjusted month.  And that’s pretty good.  Nursing isn’t easy.  At least, for a lot of us new mothers, nursing seems to be one challenge after another.

Of course, there are a lot of things you can’t do when it comes to tandem nursing.  Forget nursing while baby-wearing, or nursing while walking, or nursing pretty much ever in public.  You need a lot of space- somewhere to comfortably sit and nestle yourself in a heap of helpful pillows.  You pretty much need to be topless, gotta get to both boobs.  And if your only option of a place to nurse is a bathroom (a pet peeve of mine anyway), just forget it.  Not going to happen.  Time to go to the car, or go home, and get comfortable.


There are some real drawbacks to tandem nursing with twins.  For instance, it wasn’t until my girls were about six months old that I started nursing them individually, and had my first experience with the incredible closeness that you get, staring into each other’s eyes and falling in love.  It’s not like that with twins.  The angles are so much better for them to look at each other, and they do.  Sure, you’re there, and once in a while you get in on the love-fest.  Sometimes, one baby passes out and it’s ALMOST just the two of you.  And even when it’s all three of you, nursing is a truly beautiful thing.  But it’s bonding time for THEM, just as much as for mama and baby.  The twins are learning about each other, making friends.  It’s no less beautiful, but it is much less about you.  You just facilitate. 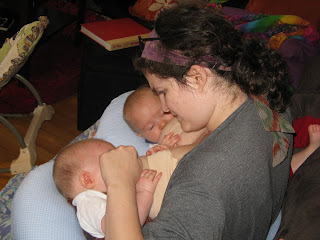 It’s humbling, to realize what the priorities in your infants life are and should be.  Is it important that they have a good relationship with their mother? Yes, of course it is.  But it is MORE important that they have friends.  That they connect with their siblings, their peers; that they learn to be an individual who will one day grow up to be completely independent of their mother.  Just as all children do, and all children must.  Yes, those early months are no time to worry about whether your kid will spend their thirties in your basement, but it is sobering, a powerful reminder that your immeasurably important job has an end goal.  The goal of producing well adjusted PEOPLE, functional adults who can use the lessons learned from their childhoods to live rich and fulfilling lives.
I did nurse my girls individually once in a while, but of course, whenever I would nurse one baby my other boob would get all leaky.  And I’d think to myself, “What a waste of milk…” and my reveries about my perfect, perfect child and the fact that I would do absolutely anything in the world for her would be interrupted with the reminder that I have TWO absolutely perfect children, and they deserved those beautiful moments together just as much as I did.
So thank you, leaky boobs!  Thank you for teaching my children to nurse, thank you for reminding me what’s important in parenthood, and thanks for all the memories.  Next time you’re around, we’ll see what other sorts of trouble we can get into.


Guest Post by:  Lea from Becoming Super Mommy http://becomingsupermommy.blogspot.com/ Thank you so much for a lovely and inspirational post!!!
Posted by Rockin' Momma at 1:12 PM

Promote Your Page Too

Rockin' Momma
I'm a mom a gamer a task juggler.. however being a wife and mother does not define me as a person it is merely an extension of what I have to give and the people I chose to give to.